The best from Fantasy & Science Fiction

THE BEST FROM FANTASY AND SCIENCE FICTION – Edited by edward L. Ferman

Each of the six extraordinary stories by major SF writers included in this anthology was written for the special on-author issues of The Magazine of Fantasy and Science Fiction, and none had appeared in book form before.

Theodore Sturgeon tells a touching and unusual story of how love conquers all – even death.’
Ray Bradbury focuses on an old man who, in a poverty-stricken world of the future, commits the crime of remembering affluence.
Isaac Asimov revives the populair armchair detective Wendell Urth to solve a puzzle left by a dead man.
Fritz Leiber tells the story of Windrush, a place beset by witchcraft an the last vestiges of a world gone mad.
Poul Anderson goes on safari in another world, populated by pooks and nicors.
James Blish recounts a man’s fall into a radio telescope and his landing 23.000 years in the future.
Each story is followed by an entertaining biography of the author by one of his famous peers, and a complete bibliography of his writings. 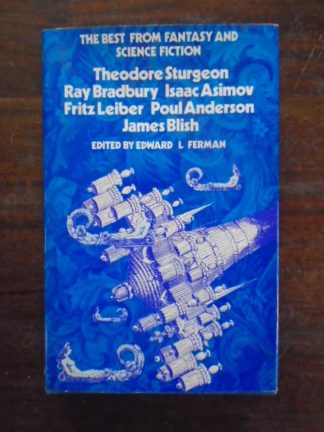