Once, at the height of Earth’s fabled history, there was a city called Ferrin. Compared to Ferrin, all the cities of Earth that ever were or ever would be – from imperial Rome and towering New York before to the city called R afterwards – paled into insignificance. But in the long twilight centuries that followed the fall of Ferrin memories faded and men’s ambitions waned… and by the time that the young man Thel heard of Ferrin, no one was sure it was anthing but a myth.
But part of an abandoned higway still passed near Thel’s home – and when a starry fragment from Ferrin came into Thel’s possession, he knew there could be no rest for him until he had followed the ruined roadway that still spanned time and space to find the thruth about the Rise and Fall of Ferrin – and also of all humanity’s hopes.
Mark S. Geston achieved acclaim for his unforgettable novels of world’s ends, Lords of the Starship and Out of the Mouth of the Dragon. The Day Star is an equally brilliant novel of a world’s high point. 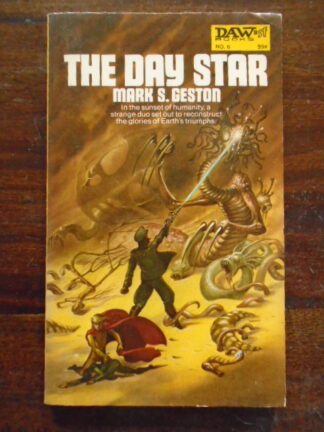